then imitate the action of the tiger

I’ve stolen that shamelessly from May.  She pulled from Shakespeare, but he’s dead and so cares very little what May or I do.

The trick here is that I am, maybe, going to try to knock myself up again.  Clearly, this is not for public consumption. See the password you entered above.  Ahem.  Prior to hitting publish, there were six people to whom I’d spoken about this.  Which seems like a lot when I count it up on my fingers, but really, for me, isn’t very many.  I’m the girl who had her boss chase down the fedex guy to take his picture when he delivered my first shipment of sperm (*sniff* – so long ago…) to school.  I’m still firmly in the camp of “share the story” because it might make other people feel less alone, but this go-round, or possible go-round, I’m just so damn tired of having to fucking explain everything.  And, believe it or not, I am still fending off well-meaning comments about how relaxing/doing it “naturally” might work.  From my peers. Picture me on my couch rolling my eyes.

I’ve resisted the phrase ttc for years now.  Because post the Summer 2010 debacle (IVF itself wasn’t so bad, but Meghan leaving and the miscarriage pretty much sucked), I didn’t need to *try* to conceive anymore: it was already done.  In vitro, if you will.  But, as you may or may not know, I ran through all 10 of those embryos, plus an even dozen of donor embryos (What? Did you know?  Right. I didn’t tell you.) and so now, if I want to continue on This Journey (N.B. skilful use of capitalization), I will have to, in fact, try to conceive.  Again.

The jury (made up of one, rather hot, doctor) is currently out in just how to do this.  Dr. Hot, because I call ’em like I see ’em, is an RE at the other hospital in town.  I’ve stuck loyally with the public, research-y one, but now I have taken to heart my non-monogamous leanings and been wanded by Another Doctor.  It feels like cheating, y’all.  I do love my old RE.  I do.  But a second opinion seems smart, right?  Justify my wandering eye for me, internet.  No, really, I feel ok about it, but it still feels like cheating.  Maybe because I didn’t tell him first.

Regardless, I had my wanding at the cheater RE’s and Dr. Hot was hot and also smart and clear and all those things and, wow, do private hospitals ever have fancier water coolers in their waiting rooms then public full-spectrum endocrine disorder clinics do.  There is also a nice view of the mountains from said waiting room.  Sorry I didn’t take a picture.  But the radio (radio in the waiting room?!) was playing Cyndi Lauper, among other great and cheering songs, and so I was distracted.

To cut to the chase, my wanding showed 18 antral follicles.  Whoa.  So that’s good, according to Dr. Hot.  She is currently refusing to weigh in with anything other than a desire for labs (re-do and new-do) and a saline infusion sonogram (the idea being that while my uterus looked good, back on the HSG films, maybe there’s been some strange goings on in there, post the miscarriages).  After all that, then maybe things will move along.

Maybe.  I was pretty clear with old Dr. Hot that I came to her looking for information, not necessarily for treatment. I told her twice that I was willing to hear anything – from “get the hell out of this office, you’ll never get pregnant let alone carry a baby to term” to “This looks like a fun challenge! Let’s go order so sperm!” We shall see what she says. (Those aren’t real quotes. There was no cussing.  Dr. Hot and I don’t know each other that well yet.)

You’ll remember, or maybe you won’t, that my plan was to keep trying until I ran out of embryos or ran out of money.  Well, I am out of both.  But I just can’t quite give up yet.  Not quite.

Once more unto the breach, y’all. Once more.

Oh, look.  It’s me.  How’re tricks in these months since we last spoke?  Well, since I last spoke and you (all 1 of you) last listened.

Things in Starrhill continue apace: roommates come and go and stay (some good, some less so); the cats sit by the fire or chase each other up trees, depending on the season; the chickens squawk and get neglected (benignly!) and still produce enough eggs for home and to share.  Of note: my upstairs bathroom is redone, which improves my quality of life immensely, and I have not acquired any new pets in the past 10 months, which I think is something of a record, but I did just buy a hammock.

But let’s jump to the now, shall we?  Because it is, well, here now, like the new agey bumper sticker says.  Other, better bloggers abhor lists, but I, well, I love a list.  Much like I seem to love the word well. Let’s make it numbered and call it Things I Did This Weekend.

Have a bonus cat picture: 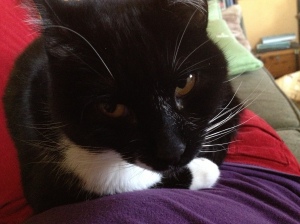 Ok, and another one: 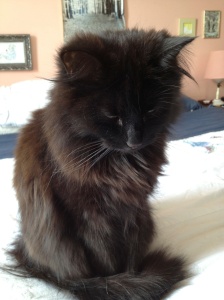 A post a week for the rest of the summer?

somebody should do some tidying around here

Aiming for once a week for the rest of the summer is do-able, don’t you think?  I mean, I’m hardly working.  And then perhaps I could also do things like clean up my blogroll, which is sadly out of date, and maybe log my lunch everyday.  Really, I have no excuse.

It’s been a hard couple of years, y’all.  But I think I am feeling better.  Time. I’ve taken two years of it and now I am calling you, though not in the morning.

I have been thoroughly enjoying Twitter and Instagram.  We can blame that for my lack of blogging, but didn’t everybody have that particular crisis like 4 years ago?  Only my laziness to blame, as per usual.

Oh, hello there, as my grandpa used to say. Hello. It has been some time hasn’t it? It has. And guess what? Three guess. First two don’t count. Yes! You got it. I’m still infertile.

But that’s boring, old news. Boring and old. Entertainingly, there is little else going on that is new and interesting. Maybe I’ll make y’all a list! I love a list.

What else? Is that enough catching up for y’all? And by “y’all” I mean “the two of you that are still reading”.

too good not to note

See, I should have been writing all this weekend, since I am on bed rest and all.  But nooooo.  There have been Issues.  So I am just writing now, and well, since it has been an age since I wrote two posts within a decade of each other, I will assume y’all are not surprised.  But!  Let’s get back on the horse, yes?  Yes.

Commitment.  It’s what’s for breakfast, as Bionic would tell you, if she were writing Caved, which clearly she is not, or else there would be things to read on here.

What would you like to hear about first?  The bed rest or the Issues?  I know!  Let’s do a list!  Other, better bloggers are a little touchy about lists, but I love them with a fierce and devoted love that is akin to my love for popcorn.

So this has been the lest restful bed rest so far, although I have high hopes for today.

What else shall I tell y’all about?  The new kittens?  The down and dirty tale of exactly how my infertility goes these day with sub-topics like the draw of genetics and What Bitterness Means To Me?  The roundabout of roommates?  Links to some great blogs of families incorporating Montessori ideas into the spaces they make for their babies?  The slippery slope that is me and tv via netflix?

You can always log your lunch while you think it over.

more art more of the time

Car drawing above by the lovely and talented Jess Rowe.
caved